Because none of the other animals will play with him, Joshie the sea otter swims too far out to sea, but he is called back by a song sung in the strong safe voice of his mother.

“Splendid paintings in a variety of shimmering Arctic hues illustrate a soothing bedtime story. In search of a playmate, Joshie Otter swims far away from home, past seal pups, walrus calves, puffins, kittiwakes, murres and a stalking fox. Stranded in the middle of the cold, nocturnal sea, he hears his mother’s song and follows it home, swimming back past these same animals, who are now asleep.” — Booklist

This story began as a song I sang to our second son, Joshie, when he was around one year old. It was published as a book when he was in the second grade. The illustrations are by an artist from Tokyo and the book is in Japanese as well as English.

When everyone goes to sleep
The whales come out and play
They dance in the moonlight
As they sing a song
And in that song
You will hear a tune
And in that tune
Is the whale’s secret.

by Josh (in second grade)

I always wanted to put this in the second Joshie Otter book but alas, Joshie Otter’s Water Music was never published.

When words freeze In the thin, brittle air and nostrils stick together, The snow speaks in squeaks and crunches under the children’s feet. Cold Cold Cold.

Captures the sights and sounds of the season’s first snowfall, leading up to the coming of Christmas.

“Whether the snow is crunching under boots, blowing before the plow, holding the impressions of animal tracks and angel shapes or shining in the moonlight—it speaks volumes to the children who have “wise and patient” eyes. Carlstrom’s lofty text reflects the mystical properties of snow…” — Publishers Weekly

Our first winter in Alaska I was impressed with the snow, the designs in it, the marks on it and, in a sense, what it would say to you if you really looked and listened. A few years later I celebrated the New Year by writing The Snow Speaks in the little cabin where I did most of my writing. It was very cold (-45 degrees), with sparkling stars and Northern Lights.

One night shortly after moving to Alaska our son, Jesse, said, 'Goodnight Mommy Moon.' And I replied, 'Goodnight Jesse Star.' In the morning I began work on Northern Lullaby and it was as if I had dreamed it all night long.

“Much like the classic Goodnight Moon, but with a nod to Alaskan wilderness and lore, Carlstrom’s latest picture book is a gentle hymn about preparing for bedtime and the magic of nightfall… The non-rhyming quatrains of Carlstrom’s poetry possess a soothing, lilting quality, perfect for quiet reading times.” — Publishers Weekly starred review

The beauty and majesty of nature is brought to life in this dramatic, richly descriptive picture book.” – School Library Journal. 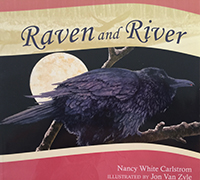